Theresa May once told a Tory party conference that people viewed Conservatives as “the nasty party.” She claimed this was an unfortunate misunderstanding, to be rectified by improving the party’s public-relations campaign.

While few readers of Socialist Voice would fall for that type of self-serving nonsense, too many others accept a similar explanation for the misanthropy of the capitalist ruling class, wherever they reside. Although the uber-wealthy often have an ingrained contempt for working people, it is important to recognise that their behaviour is, at base, motivated by strategic calculation rather than dictated by emotion.

In a nutshell, the driving forces at the top in capitalist society are actively engaged in a class conflict designed to perpetuate their position, wealth, and power. This clash becomes especially sharp whenever the nature of the world’s economy undergoes significant change, as has been happening in recent decades. Globalisation, assisted and driven by rapid technological advances, has not only moved the principal centres of physical production: it has also created a new category of highly skilled and educated workers in the ITC sector. These people are often meagrely paid and, in classic terms, are facing proletarianisation, if not already members of that community.

The outcome has been to leave many manual workers in the United States and western Europe either redundant or in badly paid precarious employment; and they are understandably discontented and restless. At the same time there has emerged that section of the working class that, if moved to action, would have very real industrial power within their grasp.

Just consider, for example, the effect of mobile-phone providers going on strike. Taken in tandem, this creates a potential threat to the status quo.

Moreover, running parallel with rapid advances in communications technology over the past few decades there has been an astonishing surge in access to the mass social media. Admittedly much content of these media is either tedious, frivolous, or actually dangerous, but they nevertheless have a powerful ability to disseminate information on the harsh reality of life for working people.

Not since the development of printing in the fifteenth century has there been a similar expansion in the potential for “common folk” to share information and ideas. And, just as the Vatican learnt five hundred years ago, informed and communicating grass roots can become threatening grass roots.

Not that there is any shortage of cause for working people to feel aggrieved. Consider just two statistics in relation to the Republic’s two-tier economy. There are 80,000 millionaires in a state that has 10,000 homeless; and there are more than half a million citizens on outpatient waiting-lists. No matter how placid the working-class majority may appear at present, the ruling elite realise that, ultimately, it is not possible to maintain a situation of such gross inequality.

As the internet billionaire Nick Hanauer wrote to his fellow-oligarchs in 2014, “no society can sustain this kind of rising inequality. In fact, there is no example in human history where wealth accumulated like this and the pitchforks didn’t eventually come out . . .”¹

Faced with a choice between facilitating an economy based on a meaningful redistribution of wealth and on the other hand retaining the present gross inequalities, capitalism will undoubtedly opt for suppression rather than concession.

Central to this strategy is control of society’s resources. For evidence of this, simply consider the relentless drive towards privatisation: telecoms, tolled roads, health services, bus routes, care for the elderly—and the list goes on. Most significant of late has been the return to landlordism as the norm in housing. This most basic of human needs is now more often than not within the gift of a privileged few.

This is nothing less than the consolidation of wealth and resources in the hands of a small elite, which in effect deprives the working-class majority of options. Without public housing, and with mortgages being largely unaffordable for many, it becomes more difficult in practice to withdraw labour when the consequence of failure to pay rent is eviction.

Thereafter begins free-fall. Wages are held down through the spreading of fear and insecurity as every aspect of the social welfare safety net is pared to the bone. In effect, the ruling elite is striving to place the entire class in an economic chokehold.

Moreover, in the face of the changing nature of capitalism, social democracy has imploded almost everywhere as it attempted to appease those dogmatically pursuing the neo-liberal agenda. Even the rising star of Germany’s once-powerful Social Democratic Party, Kevin Kühnert, confessed in a recent interview that “suddenly, the message was that people should take care of themselves, that markets can do things better than the state. We privatised, we deregulated the labour market, we abandoned rural areas.”²

In the light of all this, the Peadar O’Donnell Socialist Republican Forum is adamant that the Irish working class needs to build for itself a strong extra-parliamentary mass movement. Today, the Irish state and its institutions serve the interests of those who have economic power and wealth.

The Forum believes it is necessary that the lessons of the magnificent Right to Water campaign be built upon and that the power of the people be maintained. This, however, requires an organisational vehicle that can co-ordinate activities and activists throughout the country, and to do so on an agreed programme that addresses the range of issues affecting working people.³

To this end, the Forum is promoting a gathering of interested parties and individuals on Saturday 26 January 2019, firstly to celebrate the centenary of the first Dáil Éireann and the Democratic Programme and thereafter to facilitate the creation of an arena capable of building a mass extra-parliamentary movement. 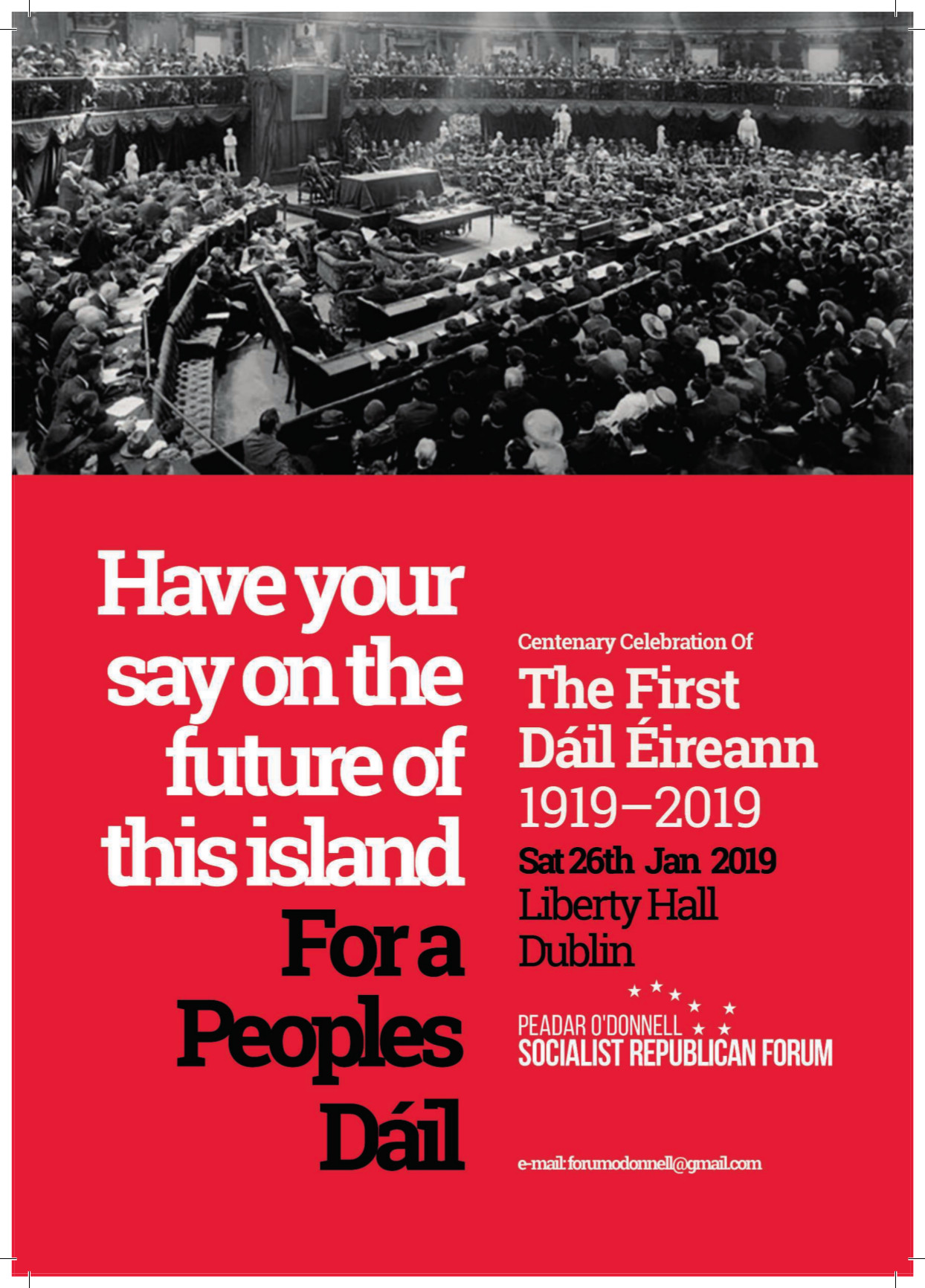 Already the Forum has canvassed widely and has received an encouraging response. Nevertheless, more must be done. This initiative requires the widest possible effort by working people committed to establishing a democratic and sovereign Irish republic, free from domination by either a native bourgeoisie or their imperialist allies abroad.

Bear in mind that those forces opposed to the creation of a workers’ state are not in the least sentimental. They have calculated their own strengths and weaknesses and have planned accordingly. We, the working class, must do the same if we are to prevent our descent into misery.

Let’s gather in Liberty Hall on 26 January and agree a process that can carry out these promises for long-suffering working people.