As the time for a final deal between the British state and the European Union draws near, the British government is attempting to push through its minimalist Brexit strategy so as to secure its “special relationship.”

We need to recall that Brexit is the result of a political division within the Conservative Party, the political party of the British ruling class. This reflects the split within the capitalist class—by no means confined to Britain—generated by the persisting economic crisis. The settled view of both the British state and the dominant sections of British finance capital was and is to remain within the EU if at all possible.

The British government and British state have been manoeuvring from the very beginning to reverse the decision to leave, or at least to minimise the rupture between the EU and Britain. Brexit has not only exposed a deep fissure within Britain but has severely weakened the EU itself, and has contributed to a further rise in anti-EU sentiment throughout Europe, as can be seen in France, Belgium, Italy, and—most importantly—Germany.

But the beneficiaries of this growing disillusionment have been the political right, facilitated by the opportunism and cowardice of the social-democratic left. The parties criticising the institutions of the European Union have mainly been on the extreme right, some leaning towards fascism.

What is happening is that the remainers within Britain and the EU on the one hand and on the other hand those in Britain who want to see a clear break from the EU have been using the British border in Ireland as the means of securing their strategic positions. Such people as Boris Johnson, David Davis and Jacob Rees-Mogg are using the British border in Ireland as their lever to ensure that Britain leaves the single market and EU customs union.

The DUP know full well that the British state and government will do what is in the interests of British monopoly capital regardless of other considerations, and that the interests of the DUP will be well down the political agenda.

The British Brexiteers are using the DUP to lever May’s government into taking a harder line in the negotiations with the EU. At the same time the DUP have been attempting to use the Brexit negotiations to raise questions about the continued relevance and the future of the Belfast Agreement of 1998.

The EU and the Remainers within the Tory party, with significant support among British Labour Party MPs, are trying to use the British border in Ireland to ensure that Britain remains within the EU single market and the customs union. They are holding on fast to the mantra of “no border in Ireland,” and using the Belfast Agreement as the stalking-horse to bring this about.

Most of the Tory and Labour MPs would have little if any understanding, nor do they really care, about Ireland and our people. The large demonstration in London calling for a second referendum on Brexit or for the terms of the separation to be put to the people was in the main a middle-class affair. No major organisations of the working class either took part in or supported the demonstration. Yet the little-reported opposition from the working class to membership of the EU remains a decisive factor in relation to Brexit.

The Irish government has been attempting to present itself as having influence at the EU table. But the truth is that they have very little, if any, influence regarding Brexit and the Irish “backstop.” We have the Taoiseach waving around newspaper reports of IRA attacks on border customs posts from 1972 as evidence of what could happen if a new border is established—a strange position for the head of the Irish government to be articulating, given the record of his own party, and of successive governments, and their collaboration with the British state.

In addition, the unionists did not take kindly to his antics, and view them as a threat of renewed violence.

There are significant movements of capital between the north and south of the country, and the Irish capitalist class, whether from the nationalist or unionist traditions, are anxious to see this continue.

There are also growing noises from both the government and business that a united Ireland is inevitable, a concept absent for many decades from their political vocabulary. Some are even attempting to pose the choice facing the professional classes, which traditionally supported unionism, as one between two unions: the union with Britain or the European Union.

The Irish labour movement has displayed great confusion regarding how it should respond to Brexit. It has spent the last forty years cosying up to the EU, selling it to Irish workers as the “protector of workers’ rights” and in the process receiving funds from the EU for education and training.

We need to step up the struggle for an Irish exit, as our interests as a people, and in particular the interests of the working class, will never be served by the EU and its institutions.

That does not mean that we simply fall back into some subservient relationship with the British state, as in the past. Instead, a departure from the EU could provide the opportunity to break both dependencies and establish an independent, sovereign national democracy, giving real power and influence to working people.

The labour movement needs now to be actively supporting north-south co-operation, the all-Ireland economy, and the protection of the Belfast Agreement. We need to be bold in our demands and not retreat into failed strategies of encouraging the British Labour Party to organise in the Six Counties or establishing a Northern Ireland Labour Party mark 2.

Historical experience has shown that only the working people of Ireland have the capacity to end partition and unite our people, to establish meaningful national sovereignty and national independence, in order to secure their own material needs and interests.

Retreating to the past is not an option. Instead we need to push real, concrete demands for all-Ireland solutions to health, education and economic and social development, an all-Ireland investment and industrial strategy that favours working people, and targeted capital investment that meets the needs of our people, not the needs of speculators and profit-hungry corporations. This requires national control of capital, something that is totally illegal at present under EU rules.

The EU—like the British state—is an obstacle to building a people-centred economy for the working people of Ireland.

But no matter the outcome of the current negotiations, the balance of forces has been shifted, and is shifting. The EU will never be the same again. 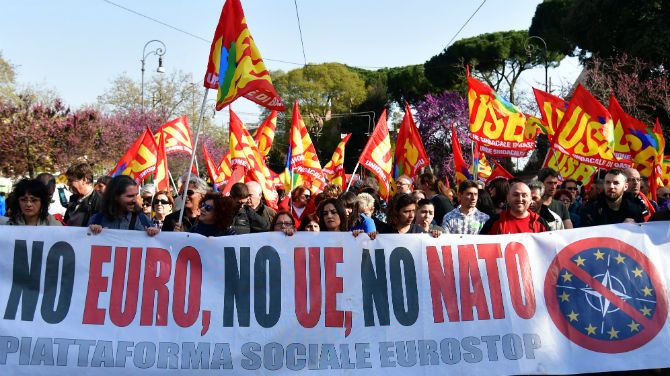 Italy under the cosh

And, as the negotiations between Britain and the EU stumble on, the EU Commission has issued a diktat to the new Italian government rejecting its budget and threatening sanctions against the country if it does not comply.

The Italian government—like the Irish, Greek, Spanish and Portuguese governments—has to submit its budget to the EU and Berlin before it is presented and voted on by the national parliament, making the idea of democracy at the national level redundant.

The Italian prime minister, Giuseppe Conte, insisted that his government has no “plan B” for its budget, as the EU demanded unprecedented changes to bring the country into line with EU spending rules that result from adopting the EU single currency.

Actual EU sanctions against Italy would be very difficult and would only further deepen the widespread scepticism about the EU and in particular about retaining the euro itself. The rejection of the country’s budget could strain the governing coalition, in which Conte stands as mediator between the powerful deputy premiers, Matteo Salvini of the League and Luigi Di Maio of the Five-Star Movement.

Neither party in the coalition can afford to back down, for fear of conceding ground to the other. It is one thing to bully the likes of Ireland, Greece, Spain, or Portugal; it’s another matter to bully one of the founders of the EU and a very large economic force in its own right. This would only lead to growing resistance from within the Italian working class.

Germany itself is now showing strains, as can be seen with the near-collapse of the Social Democratic Party, the weakening of the ruling Christian Democratic Party (losing 10 per cent of its support), and the rise of the right-wing Alternative for Germany, which gained 12 per cent and so entered the regional parliament for the first time.

With the administrators of the EU desperately trying to assert their authority on a number of fronts, events are beginning to put strains on the EU itself and on how it manipulates its growing contradictions.