BlacKkKlansman is Spike Lee’s latest cinematic offering, a dramatic dark comedy that is based on a true story of a black detective who goes undercover in the Ku Klux Klan in the 1970s.

The film has suffered criticism for being “anti-white” (the irony is tangible on that one) and for whitewashing police racism and police interference in radical political groups; but even so it has largely been well received, consistently receiving 4 out of 5 stars.

Lee masterfully holds some very harsh truths about the state of present-day American politics up to the viewer, and with well-timed comic relief he ensures that they don’t look away or feel hopeless or defeated by them.

Like his Malcolm X biopic, Lee uses relevant news, film and amateur footage spliced in at key moments. One of the most powerful examples is when KKK members watching and howling at scenes from Birth of a Nation (1906) are juxtaposed against a Black Student Union meeting, where a stunned audience listens to the horrific story of the murder of Jesse Washington by the white residents of Waco, Texas. Members stand at the top of the room and hold up blown-up images of the murder taken by a photographer at the time, who then sold souvenir postcards of the event. It’s a stunning moment, which carries the weight of Lee’s message phenomenally well.

At several points BlacKkKlansman does attempt to address the questions of racism in the police force, and the police violence and intimidation that stem from it, but it falls very short. Lee must have been expecting some kickback for this failure, and his sympathetic portrayal of a police officer as a scene that takes place midway through the film provides a nice readymade cover for the faults of the BlacKkKlansman.

A light-hearted discussion takes place between the president of the students’ union, Patrice, and the undercover detective, Ron, where they talk about Blaxploitation films. Patrice makes the point that “it could never happen. It’s fantasy.” And it works perfectly. 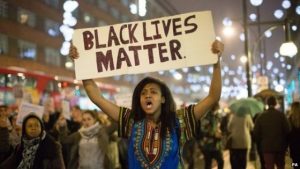 Blaxploitation films, though hugely problematic, with white-controlled studios profiting from a revamped stereotype of ghettoised black men and women who were violent and hypersexual, were also one of the few eras in cinema when young black people could see themselves in leading roles, in majority black films, produced by big studios. Some Blaxploitation films were even able to sneak in themes of black power—an impossibility in any other genre.

BlacKkKlansman is following in that tradition. The story is a tidied-up version of events and of the world, a place where it is possible for the first black detective in Colorado Springs to make a difference, act ethically and in keeping with a black power ethos, challenge the system, defeat and mock the Klan with his fellow-workers, and get the girl.

Lee knows that BlacKkKlansman cannot be all things to all people; and it’s unfair to expect it to be. His personal politics aren’t perfect, and his films can’t be, but it’s a vast improvement on another white-directed, white-led “Everyman” story about nothing and never close to political. Holding Lee’s films to a higher standard for daring to try (and ignoring where he succeeds) is to be deeply unfair to his work.

That said, there is a whole narrative around ethics à la Spy Cops and the infiltration of black power movements which is entirely sidestepped for brevity’s sake, with the nasty side-effect of playing down Patrice’s very valid points on the systemic nature of the problems in policing, effectively silencing her and her politics.

Though BlacKkKlansman doesn’t have the critique of capitalism through racism that Sorry to Bother You promises (still no Irish release date), or the critique of police brutality and police racism that takes centre stage in The Hate U Give (19 October), that isn’t to say that the film is without merit. A very enjoyable watch, with some genuine thought-provoking moments, and laughs to boot.