In late March 2018 the president of the United States, Donald Trump, authorised a $20 million fund to support subversive actions against Cuba.

The move, which is part of the permanent anti-Cuba policy, came after Trump himself had proposed eliminating such funds in May 2017. The money is specifically for subverting internal order in Cuba.

Despite large cuts made by the president in funds destined for the State Department and foreign assistance for this year, the government did not hesitate in allocating this large sum—as had previous US governments—to pay for subversive activities in Cuba, under the so-called “promotion of democracy” projects.

Since 1996, when the “Cuban Liberty and Democratic Solidarity Act,” commonly called the Helms-Burton Act, was adopted, the United States has used public funds for anti-Cuba schemes. Between 2009 and 2016 the Obama government proposed at least $20 million annually for these aims.

These funds come on top of those provided for maintaining subversive radio and television transmissions into Cuba, as well as the money made available for penetration and intelligence actions. 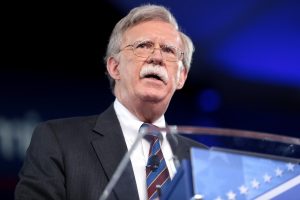 “There is no United Nations. There is an international community that occasionally can be led by the only real power left in the world, and that’s the United States, when it suits our interests and when we can get others to go along.”—John Bolton (author of “The legal case for striking North Korea first” and “How to defund the UN,” newly appointed US national security adviser), 1994.

The newly appointed US national security adviser, John Bolton, is expected to take a hard line against the president of Venezuela, Nicolás Maduro, and his government, it has been revealed.

Bolton, a former US ambassador to the United Nations, was described by one senior American official as someone who “always emphasised how Cuba and Venezuela and Nicaragua have undermined US interests throughout the region.”

“He’s a warmonger, and Latin Americans get nervous when American presidents tend to lean towards military versus diplomatic solutions,” an official of the National Security Council under President Obama told the Miami Herald. “It’s a militaristic style that won’t go down well in Latin America.”

During a hearing on Syria and Iran in 2013 Bolton claimed that Venezuela was protecting Iranian smugglers. “These are expert smugglers . . . The largest Iranian diplomatic facility in the world is in Caracas . . . They are laundering their money through the Venezuelan banks.”

Bolton has also urged that stronger sanctions be imposed on Cuba. During his term as under-secretary of state he named Cuba on his “axis of evil” list, claiming that the Cuban government was attempting to develop biological weapons. During a speech to members of the conservative Heritage Foundation he said: “The United States believes that Cuba has at least a limited offensive biological warfare research and development effort.”

Days before it was announced that Bolton would replace Herbert McMaster as President Trump’s national security adviser, the Venezuelan minister of defence, Vladimir Padrino López, warned the US secretary of state, Mike Pompeo, to avoid repeating his predecessor’s mistakes by instigating a coup in Venezuela.

“If Mike Pompeo comes with the same policy that Tillerson [a previous secretary of state] initiated, with the same line of attack—of aggression—against sovereignty, against a population and its armed forces, he will again be faced with a wall,” Padrino said. “There cannot be a military coup here: we are in the middle of the 21st century. I need to say this to whoever talks about a military coup, that we are in 2018 . . . A military coup? This is part of the past.”