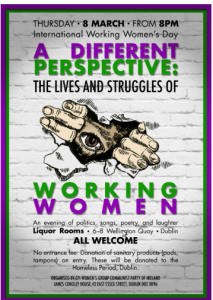 On 22 February this year the Feminist Ire blog published an open letter to the organisers of the “We Need to Talk” tour. The letter is well written, and solid in its argument, and highlights the ideological divide in modern feminism.

The “We Need to Talk” tour organisers are known for pushing a transphobic agenda (largely aimed at Trans women)¹ and their opposition to the proposed amendments to the Gender Recognition Act in Britain. The signatories of the letter make it clear that there is no room for this style of feminist politics in Ireland.

There have been a number of fault lines in feminist circles for years, and Trans rights are just one of the more visible and vitriolic ones. The divide runs deep and places Trans women themselves in the centre of a very bitter fight over the legitimacy of their identities.

Trans-exclusionary (or gender-critical) radical feminists (TERFs) make the argument that the proposed amendment to the Gender Recognition Act, which will allow people to self-declare their gender, will mean that men will use it as a way of invading women’s spaces, either by outright falsely claiming to be women or through the guise of “mentally ill claims of perceived womanhood.” This system of self-declaration has been used in Ireland since 2015 and, to quote the open letter, “the sky has not fallen. Cis women have not lost anything.”²

A criticism often thrown at feminist politics is that it engages with an individualist approach to politics rather than a class perspective; but that view is one that is formed by people who are not engaging in feminist action on the ground. It is the same view that is presented by the media and greedily consumed by those wishing to dismiss feminist politics as somehow less deserving of attention or lacking in theory or development.

We can see the same issues that arise in the media presenting liberal feminism as the only version of feminism, mirrored in the assumed voice of the trans community. Jennifer Lawrence and gender pay inequality in Hollywood are not any more representative of the working-class feminist movement than Caitlyn Jenner of the Kardashian clan, with her middle-class, right-wing views of the working-class trans experience.

Many TERFs claim that trans women do not share the experience of oppression that is part and parcel of existing as a woman in a patriarchal society. This analysis assumes a shared experience of all (cis) women by virtue of their birth, their sex alone. To think a working-class woman would have more in common with a cis middle-class woman, as opposed to a fellow-working-class trans woman, because one has a set of ovaries, is a total and utter failure of class analysis. It also negates women who do not conform to their concept of the typical female experience—having ovaries, womb, etc., along with menstruation and childbirth.

A working-class trans woman and a working-class cis woman will always have more in common with each other than with Hillary Clinton, no matter how different their experiences of womanhood have been. Trans women are more likely to suffer discrimination in the work-place, when it comes to finding accommodation, and on the street. This discrimination is not a separate struggle but one that is compounded by class divisions in society and by misogyny.

To dismiss trans activists’ fight for recognition of their gender pushes these women even closer to the periphery as well as displaying cultural and political trans/misogyny that dismisses and belittles their work in all fields. We either stand shoulder to shoulder with our class in all their progressive causes or our solidarity rings hollow and false.

Greetings on this International Working Women’s Day to all women involved in class struggle—
As we go marching, marching, we’re standing proud and tall.
The rising of the women means the rising of us all.
No more the drudge and idler, ten that toil where one reposes,
but a sharing of life’s glories, bread and roses, bread and roses.

1. Transgender (often abbreviated to trans) people have a gender identity or gender expression that differs from their assigned sex.

2. Cisgender (often abbreviated to cis) is a term for people whose gender identity matches the sex that they were assigned at birth.