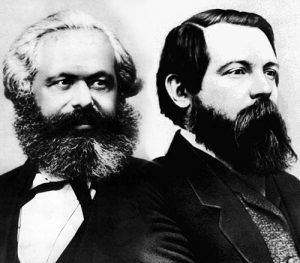 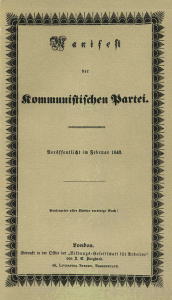 Cover of the first edition, written in German, published in London in 1848. It reads: “Manifesto of the Communist Party | Published February 1848 | Proletarians of all Lands, Unite! | London | Printed in the offices of the Workers’ Educational Association | By J. E. Burghard | 46, Liverpool Street, Bishopsgate.”

In February 1848, 170 years ago, Marx and Engels published the Manifesto of the Communist Party, commonly called the Communist Manifesto, the birth certificate of scientific communism.

A hundred years later Bertolt Brecht, the German communist poet, attempted a versification of it. Below are extracts, translated into English by Jack Mitchell.

Wars ruin the world and a spectre is haunting the ruins.
Not born in war, seen around in peace too, for some time now.
Nightmare to rulers but friend to the children that live in the townships.
Shaking its head as it peers into half-filled plates in poor kitchens.
Standing in wait then for those that are weary at pit-head and yard-gate.
Visiting friends in the prisons, passing in without pass-card.
Seen even in offices, heard in the lecture-halls, personally
Sometimes mounting giant tanks and flying in death-dealing bombers.
Speaking in various tongues, in all tongues. Keeping silent in many.
Guest of honour in ghettos and slums, the terror of palaces
Some here to stay, and for ever: its name in Communism.

Much you’ve heard tell of it. This, however, is what its founders say.
If you read history you read of the deeds of immense individuals;
Their star, in its rising and falling; the march of their armies;
Or of the pomp and destruction of empires. For them, for the founders
However, history is foremost the history of conflicts of classes.
They see the peoples internally split into classes and
Warring within. Patricians and knights, plebeians and slaves
Nobles, peasants and craftsmen, proletarians and bourgeois today
Keep in their turn the whole mighty household in motion, creating
And distributing the goods that are needed for living, but also
Fighting their fight to the death, the old fight, the one for dominion.
. . .

Never before was unleashed such a wild surge of creation
As that which the bourgeoisie in its epoch of sway has unfolded
One which bowed nature to man and made steam and electrical power
Cleared rivers for shipping and continents ready for tillage.
Never before had humanity guessed that asleep in its womb
Such liberations were lurking and powers of production like these.

This, however, was how it went: blast-furnace, weaving-loom, steam-power
Revolutionised manufacture and now the guilds and all feudal
Property turned into fetters that cramped this colossal creation
And up rose the bourgeoisie and shattered the fetters.
Free competition moulded the state form of the bourgeois class.

You see then how hurricane-like is the rise of productive forces
Smashing the time-honoured modes of producing, believed everlasting
And with what impetuosity classes, subservient yesterday
Tear up all the title deeds, ridicule hoary and reverend prerogatives.
. . .

Thus, when this class, provided with new title deeds and prerogatives
Had conjured up means of production in past times undreamed of
Then it became like the sorcerer who could no longer control
The subterranean powers he had so craftily raised.
Acting like dammed-up water that first feeds the crops and then
Drowns them completely, the means of production, ever expanding
Multiplying thus the might of this class, expanding still further
Threaten that class with extinction; just as the founders have shown us.
. . .

For millions of workers however
Whom it commands as large armies planlessly ordered about
Herding them into the sweatshops, now out of the sweatshops again
Brusquely on to the icy streets – the truth is now dawning, they whisper
Amazed to each other that the days of the world of the bourgeois are numbered
Since it in its ceaseless increasing increased their misery only
Since it has grown too narrow to compass the wealth it created.

Now however those weapons wielded with deadly effect
To shatter the feudal world are turned on the bourgeoisie.
Yes it too has brought forth a class that will bear those death-dealing
Weapons against it, for all through the centuries, bound in its service
Grew with the bourgeoisie also the proletariat of the modern
Workers, living by labour and finding work only so long as they
Work in the bourgeois interest, increasing his capital interests.
Just as the capitalist sells his commodities, likewise the worker
Sells his commodity, namely his labour-power, being subjected
Therefore to competition and all the ups and downs of the market.
Appendage merely to the machine he sells his simple knack
Costing no more than the cost of his keep and whatever little he needs to
Reproduce and bring up his kind, that most useful of species
Since labour-power’s price, like the price of all other commodities
Depends on its cost of production. Out of the tiny workshop of old
Handicraft grew the great factory ordering army-wise
Work and the workers, slaves of the bourgeois state but also
Slaves of a certain bourgeois, his overseers and the machine.
. . .

Therefore the one class capable of defeating the bourgeoisie
And shattering the fetter its state has meanwhile become
Is, in our time, the working class. It is this by its size and condition.
All that once guaranteed life in the older society now is
Rubbed out, done away with, in the life of the proletariat.
Propertyless, head and provider no longer to wife and children
Hard to distinguish by nation or native place now, for the selfsame
Subjection at the selfsame machine marks him from Essen to Canton
Morals and religion confront the proletarian as fata morganas
Mirroring to him, far off unattainable, edens in deserts.
. . .

His is the movement of the immense majority, and his dominion is
Domination no more but the subjection of all domination.
There oppression alone is oppressed for the proletariat must
As society’s undermost stratum, in rising, completely demolish
The social set-up entire with all its uppermost strata.
It can shake off its subjection only in shaking off all
Subjection from all people.

For the full text of Brecht’s poem in English see the translation by Darko R. Suvin, accessible at http://sdonline.org/31/on-brechts-the-manifesto-comments-for-readers-in-english1/