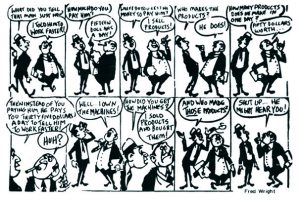 Has the wage system hidden the class nature of our society, where one section—the capitalist class, the owners of finance and industry—exploit working people, the wealth-producers?

It is this class that enforces the wage system, as they are the paymasters at the end of the day. Working people enter into a contract whereby work—the combination of effort and time—is exchanged for wages.

The working class have endured capitalist rule as they exchange their labour-time for an amount equivalent to a social necessity for the maintenance and reproduction of the worker, based on the level of development of the particular country. The class nature of society, however, is not revealed within this relationship; and so the worker and their main organising body, the trade unions, concentrate on the level of wages needed to maintain this social necessity, rather than on the relationship between capital and labour.

Struggles to increase the level of wages have been and will continue to be a feature of the system; but are workers and their trade unions, which concentrate on the level rather than the system of wages, blinded by what is going on when we exchange our labour time for wages?

If you are to talk to anyone earning a minimum, living or average wage they wouldn’t necessarily see themselves being exploited; but you can be sure they will say they don’t earn enough. It’s pretty obvious that employers and employees have different interests. One wants to continually increase their level of wages, while the other wants to continually decrease the costs of labour. Whoever has the greatest social power in this relationship will increase their share of total wealth.

If we set up a situation where instead of a wage system we have a barter system, in a perfectly competitive market, people will enter the system knowing the value of what they are willing to part with. In this process, on aggregate an exchange of equivalents will take place, as it would be nearly impossible for someone to continually accumulate items of greater value than what they started with. In this scenario the accumulation process would not be able to take place unless done through other means, such a slavery or robbery.

If I then add to this scenario a money form: I am willing to give someone a number of hours a day in the form of work in exchange for money. I will know that if the person buying my labour time is getting greater value from the product of my labour, then the next time I go to exchange my labour time I will demand the equivalent value. I then use the money I earn to exchange it for my needs and wants, each time exchanging equivalents. In this scenario both parties will leave happy, knowing that they got what they paid for. On aggregate, the share of wealth will be much more evenly spread out.

Marx described this process as commodity–money–commodity, or C–M–C, where workers produce commodities in order to receive money so as to be able to pay for their needs and wants at a given place and time. People will be able to accumulate a level of wealth based only on the productivity of their labour, and this will vary according to their skill, talents and level of development in a particular place and time.

In our wage system, however, at least two processes run simultaneously. Workers are engaged in the C–M–C cycle, while capitalists are within the M–C–Mʹ cycle, where the capitalist enters with a sum of money, commodity production within the labour process takes place, and then the capitalist leaves with a surplus—the portion of wealth extracted from those who labour.

This dual process is why workers don’t see the exploitation taking place, as all that is revealed to them is the C–M–C cycle, where they believe they are being paid an equivalent for their labour time. This is an illusion, a trick of the capitalist class.

What is hidden from the worker is the non-equivalent of exchange, which is what the capitalist pays to the worker in the form of wages and what they keep as their profit. The wealth is created by labour, but the product belongs to the capitalist; and through the laws, customs and standards of the private-ownership system this wealth is extracted and then divided. The strength of labour will determine what portion of the wealth they created they are able to keep.

The level of M or money is what the trade unions are interested in; and this is important, in that it protects workers’ purchasing power and living standards. But struggling inside the imposed wage system will never challenge or change the exploitation that workers are subjected to under the non-equivalents of exchange.

Marx outlined the limits to trade unions if they deal solely with the wage system and not the class struggle, for the overthrow of the capitalist system. He writes, in the final paragraph of Value, Price, and Profit:

“Trades Unions work well as centers of resistance against the encroachments of capital. They fail partially from an injudicious use of their power. They fail generally from limiting themselves to a guerilla war against the effects of the existing system, instead of simultaneously trying to change it, instead of using their organized forces as a lever for the final emancipation of the working class, that is to say the ultimate abolition of the wages system.”

As outlined above, the class nature of society will reveal itself only through the development of class-consciousness; and this can only be done through directed and targeted political education.

We need to make 2018 a year of deep study in fertile soil, and sow the revolutionary seeds once again.